Carla M. Johnson had a vision to try for a third attempt, to apply for Marvin Gaye to receive his own stamp. Like many other great music icons, Marvin should have had his spot as well.  Carla got the okay from Marvin's baby sister, Zeola Gaye to give it a try. Zeola brought me on broad because, I had just completed some prior work for her. She felt, I could bring some of my skills to the table, and work along side Carla. From day one we were off and running. In March of  2014, Carla and I put down the plan and leg work. With many tools on the internet, social media, and setting up stamp petitions, and events, we got it done. The third time was a charm. In November of  2018, the Citizens Stamp Advisory Committee, approved Marvin  Pentz Gaye to get his postal stamp. After being denied in the early part of  the 2000's, he prevailed. On his 80th birthday April 2, 2019, his stamp was released in Las Angeles, CA. His sister Zeola, and his children spoke at the event, along with the Motown's founder Barry Gordy, and Motown greats, that worked with Marvin Gaye. However, the stamp ran for one year. It is no longer available to purchase from the US Post Office. Words can not express how I feel. This was an historic moment, that I was so blessed to be a part of. I am a true fan and have been since 9 years old, thanks to my Mother. She was a huge fan and our household always rocked with Marvin, on holidays, birthdays, or just any day. His music was a part of my musical background in my life and still is to this day. 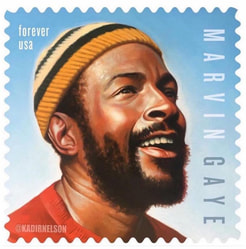